One of my favourite things to look for when travelling (especially in Europe) is finding old bookstores and libraries. That is because in Europe especially, bookstores tend to be in a old buildings filled with charm and beautiful architecture. Venice is no exception…

Venice is not just an idyllic destination for tourists, but also a great place to visit for book lovers. Famous for its charming canals, beautiful architecture, and delicious food, Venice is also home to some of the world’s most stunning libraries.

Back in the 15th century, Venice was at the forefront of printing, producing more books then anywhere else in the world. Today it is still a book lovers paradise.

Where can you find the best bookshops in Venezia?

There are not many independent bookstores left thanks to large chain stores, but there are still some standing and they are well worth a visit.

MarcoPolo is an independent bookstore with two locations in Venice. You will find best sellers and mainstream publications, along with a great selection of independent publications, rare books and even second-hand novels. There are also books in English and other languages. MarcoPolo also has meetings, readings and other literary events. Follow their Instagram account for the latest information.

This is not your average bookshop! Libreria Acqua Alta is named for the high waters that regularly flood Venice (and this bookstore), but that does not stop this shop from naming itself “the most beautiful bookshop in the world”. Walk in and find yourself wandering through sculptures made of books, bathtubs and venetian boats filled with books and cats (real ones), and an incredible courtyard that looks like it belongs in a fantasy novel. Check out their Instagram if you don’t believe me!

For three generations, Libreria Bertoni has been run by the same family and is known for its vast collection of books specialising in art, architecture, photography, history and culture. You will also find a decent selection of out-of-print books and exhibition catalogues.

Why you should add libraries to your must-see list

I usually make a point of finding out where the local libraries are in many of the cities I visit (especially in Europe), and its not for the reason you might think… local libraries tend to have public restrooms, water fountains and computers with internet access. But this is not the reason why I am recommending visiting the libraries in Venice!

Here are two that should definitely be on your must-see list:

The Biblioteca Nazionale Marciana was founded in 1537 and currently houses over 750,000 volumes. Designed by architect Jacopo Sansovino, the library was praised as the ‘finest building since antiquity’ by Andrea Palladio.

The absolute highlight to see here is the birds-eye view map of Venice created by Fra Mauro, which sits at the top of the great staircase. The map dates back to 1500 and was constructed from six woodcut murals which displays in intricate details every building, canal and campo in Venice at the time. There are also two lovely ceiling paintings by Paolo Veronese in the salon, and works by Titian.

The impressive Palazzo Querini Stampalia was commissioned in the 16th century by the Querini Family. The family of art aficionados filled the Palazzo with incredible works of art, including paintings by Giovanni Bellini, Giambattista and Tiepolo.

Sadly, however the family line ended in 1868. The last surviving member bequeathed the Palazzo and all its contents to their namesake foundation – Fondazione Querini Stampalia. The foundation turned the ground floor into a public library with over 200,000 books, newspapers and magazines.  Staying a while or simply want to explore at your own pace? Bring photo ID and the staff will issue you a reader’s card.

There are two main literary festivals to watch out for in Venice and the Veneto region, and both draw massive crowds. They are:

The Incroci di Civiltà (crossroads of civilisations) was first organised in 2008 by Venice’s Ca’Foscari University and has since become a yearly event.

Usually held in the first week of April over three days, this year due to the ongoing pandemic, it is scheduled for 3-6 November 2021.

The Incroci di Civiltà includes a book fair, public talks by international authors and cultural projects aimed at getting people exploring Venice to celebrate both the written and verbal word. One of the highlights of this event is that some sites normally closed to anyone except academics, are opened up to the public – such as Aula Baratto in Ca’ Foscari, Ca’ Bernardo, Ca’ Dolfin, and the Auditorium in the church of Santa Margherita.

Discover the famous authors of Venezia

Venice has drawn writers and artists to its islands for centuries, and during its golden age, everyone of note made a point of visiting this incredible city.

By no means a complete list, some of the famous names include:

Casanova – famous (or infamous) for his sexual exploits, Casanova wrote his memoir Story of my life (1898) in Venice. You can also visit the Casanova Museum.

Marco Polo – was born around to a merchant family in Venice, he spent two decades working for Kublai Khan (ruler of Mongolia). After years travelling across Asia and Europe, he eventually returned to Venice. His biography and travelogue ‘The Travels of Marco Polo’ tells of some of his exploits.

Carlo Goldoni – a famous Italian playwright who was active during the 1700s, one of Goldoni’s best-known works is the comedic play Servant of two masters. However, Goldoni wrote dozens of plays, operas, poetry and books.

Who are some of the Contemporary Authors?

Venice still produces local writers today, perhaps the most famous contemporary author is Tiziano Scarpa who wrote Venice is a Fish, a travelogue/memoir about the Serenissima. Scarpa also wrote the award winning Stabat Mater, which tells the story of an orphan girl who learns the violin under Antonio Vivaldi.

Another author is Enrico Palandri, among his more well-known works are Ages Apart and The Other Evening.

If you are interested in books set in Venice, then have a look at my blog post 18 Great Books Set in Venice for inspiration.

Note: Affiliate links may be used in this post. I may receive a small commission at no extra cost to you if you use my affiliate link. Full disclosure policy here.  I only recommend products that I have used personally, or currently use that I feel provide a high amount of value 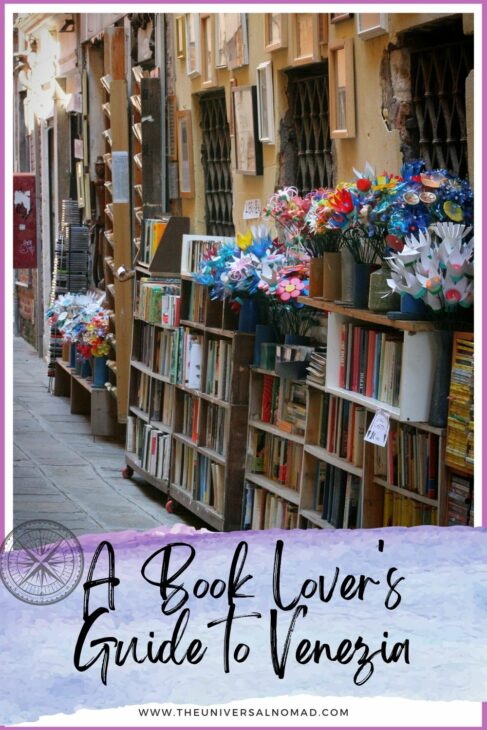 How the city of Venice was built

Are Toiletry Bags Useful for travel?

What Happened When I First Started Travelling

How to explore Venice from Home with Virtual Tours

Japan – The Land of Contrast