The original heart of Paris, La première, the 1st Arrondissement, no matter what you choose to call it, this area is the centre of the City of Light.

At 0.7 square miles this arrondissement is small, yet packed with museums, shopping, history and culture. While you can certainly walk the entire area in a single day – to really give the area its due appreciation, you would need to spend more than a few weeks here.

Unfortunately, we can’t spend all our time in just one tiny part of this incredible city, so here is a short guide on what to see and do while visiting the 1st arrondissement in Paris.

The origins of La première, and the centre of Paris, reach back to the times of the ancient Celtic tribe named Parisii. In 259 BC the Parisii settled on the banks of the Seine, living there as fishermen until the Romans conquered the area in 52 BC. The Parisii burned their town to the ground rather then surrender it to the Romans.

The Romans renamed the area to Lutetia (Lutèce) and rebuilt. Barbarian invasions and attacks across the region happened for until the 4th Century, and along the way the city was renamed to Paris (in honour of the original Parisii).

In 451, when Attila the Hun was marching towards Paris, Sainte Geneviève, the patron saint of Paris, convinced the citizens to stay. Telling the people that they had the protection of heaven and that the attack would be inconsequential. For whatever reason, Attila decided to attack Orleans instead and was defeated there. In 508 AD, Paris became the capital city of its region and has been so ever since.

Over time the Kings and Queens of France have left their mark on the 1st arrondissement by building incredible palaces and gardens, most of which can still be visited today.

This way, when you look at a map, you can easily find these locations 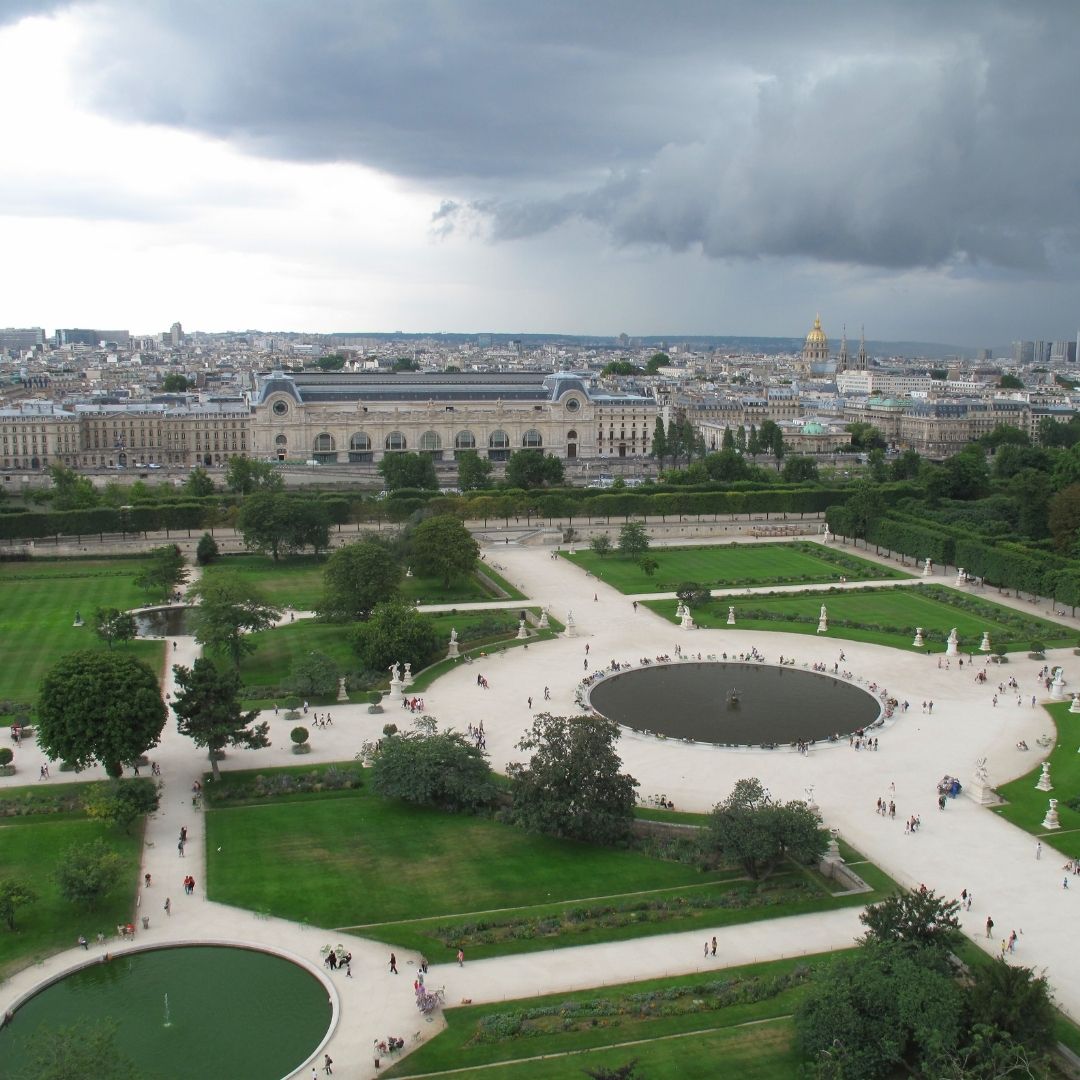 This incredible public garden, located between the Louvre and the Place de la Concorde, is named after the roof tile workshops (tuileries) and the Palace that once filled the area. While the palace was destroyed in 1871, the garden survived and has gone through several adaptions since.

In the 16th Century, Catherine de Medici had the gardens of the Tuileries palace modelled on her native Florence. Later, in the 17th Century, the gardens were remodelled to follow the French style (à la française), which is based on symmetry (similar to the gardens at Versailles and Vaux-le-Vicomte).

At the beginning of the 20th century, the Tuileries Garden was the place to be. Filled with puppet theatres, toy boats, donkey rides and more, until the onset of World War I. In the last 60 years, various governments have changed the sculptures in the gardens to suit their times. It was not until 2000, however, that sculptures by living artists were added to the gardens. Now, the current landscape architects are working to restore some of the original à la française style from 1664.

The Grand Bassin Rond is an instantly recognisable round pond surrounded by metal green chairs. No matter the weather, if the sun is shining, you will find people relaxing in these very popular chairs! 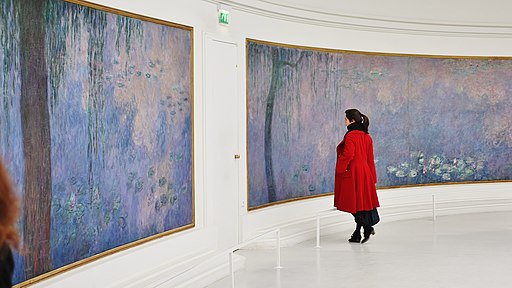 Built in 1852 the Museé de L’Orangerie as a greenhouse, this building, tucked away in a corner of the Tuileries Garden has undergone many changes in its (relatively) short life.

From a greenhouse dedicated to growing orange trees, a holding space for goods taken by the Nazi regime, an examination room, housing for soldiers, sporting events and even a venue for musicals, before finally settling into its current form as a Museum for Impressionist and post-Impressionist paintings.

The highlight and must-see in this museum is Claude Monet’s Nymphéas (Water Lilies) Series. Monet donated this incredible series only on the condition that it was to be presented in the oval rooms, as the light and layout of the room perfectly showed off these paintings. 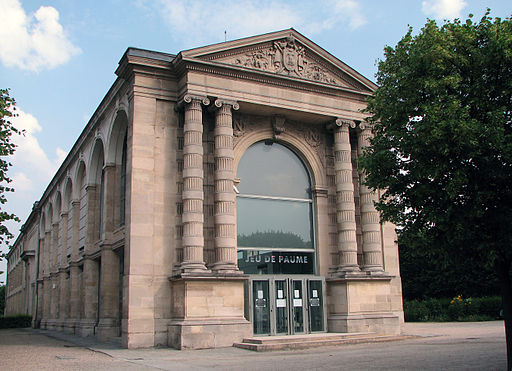 Jeu de Paume (game of the hand) gets its name from the original version of tennis. Played by monks and villagers in Southern France during the 11th and 12th centuries, it became an incredibly popular game played throughout France. The modern game of tennis as we know it was not created until the 1800s.

Tucked away in the north western corner of the Tuileries, this museum is housed in what was originally the Royal tennis court during the Second Empire.  Sadly, during World War II, the Nazis used the space to store goods stolen from Jewish families and ‘degenerate’ art banned from Germany. The space was then used as an Impressionist museum before the works were moved to the Musée d’Orsay.

In 1989 the building was renovated, revealing a spacious three floor exhibition space and a beautiful atrium which has a lovely view of the Tuileries gardens and Place de la Concorde.

Stretching from one side of the Tuileries Garden, along the Louvre and all the way to the Place de la Bastille, this street alone provides some serious sight seeing opportunities. But if you are more interested in high end shopping and unique boutiques, then the section within the 1st arrondissement is for you. 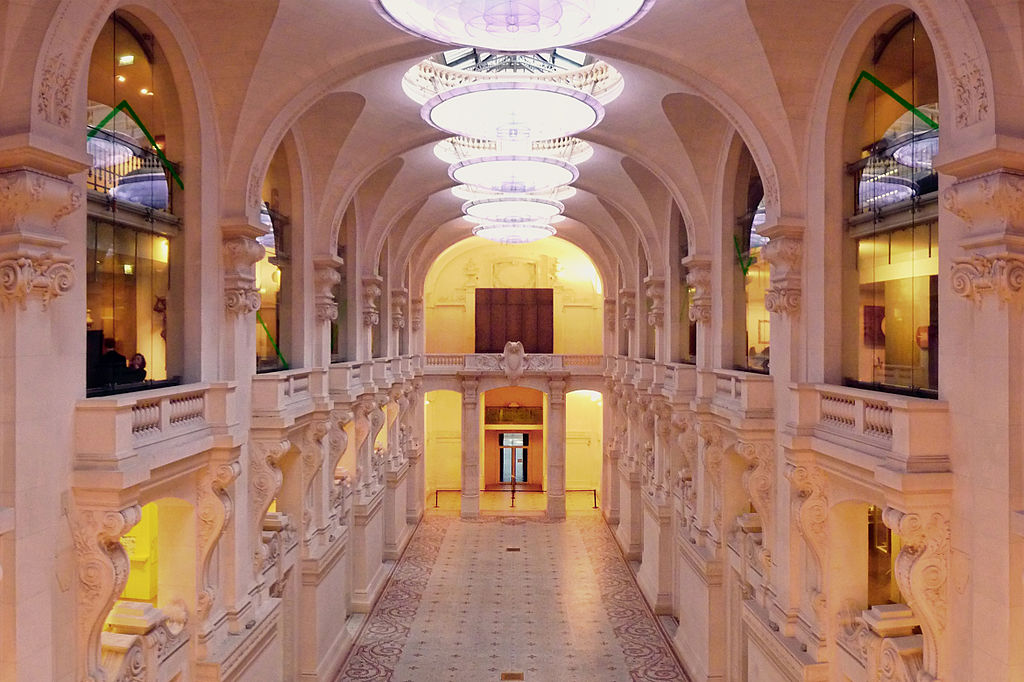 Tucked away in the western wing of the Louvre is the Musée des Arts Décoratifs (Museum of Decorative Arts). Focusing on applied art, this museum has permanent and temporary exhibits on fashion, advertising, design and graphic arts.

If you love Art Nouveau and Art Deco and enjoy a more immersive style of museum, then this is a must-see. You will even find a full re-creation of Jeanne Lanvin’s (founder of Lanvin) incredible house from the 1920’s, which was decorated by Albert-Armand Rateau.

From the top floor there is also an incredible view over the Jardin des Tuileries. 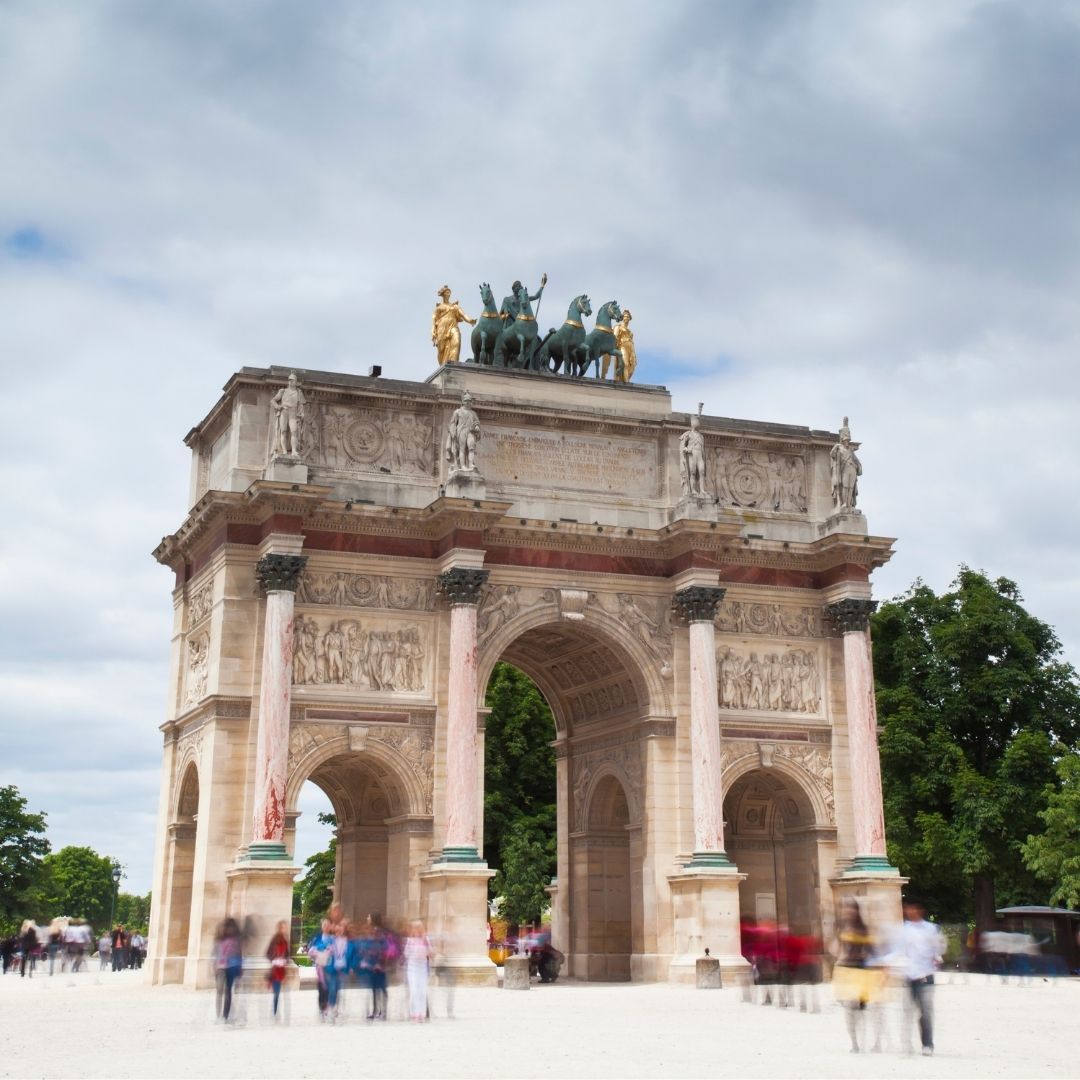 Construction by Napoleon in 1809, the Arc de Triomphe du Carrousel is found between the Louvre and the Tuilerie Gardens. It celebrates the victory of the French imperial army in Austerlitz.

Unlike the main Arc de Triomphe, you cannot access the roof, and at a (petite) 20 metres in height it is much smaller as well. The top of the arc is a replica sculpture of the ‘Horses of St. Mark’, the original of which is on the main gates of St. Mark Basilica in Venice. 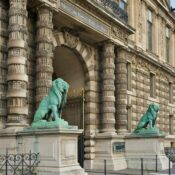 Not so much a monument to tick off (though the lions are impressive), but rather a hidden alternative entrance to the Louvre.

The rules regarding this entrance do change occasionally, but if you have pre-purchased your ticket to the Louvre online, you may be able to side-step the crowds at the main entrance (Galerie du Carrousel). 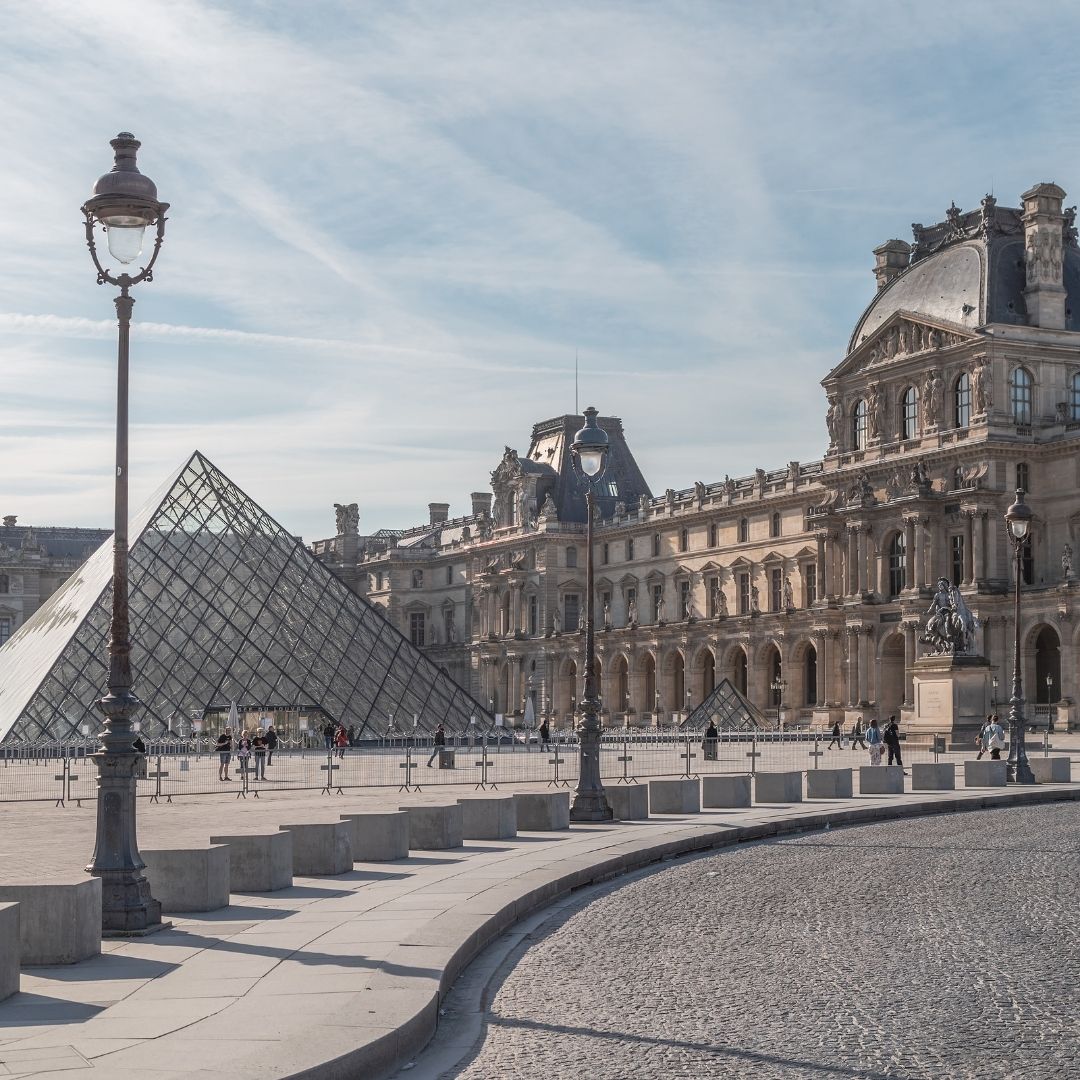 You won’t need a map to find the Louvre, simply look for the  fortress and iconic glass pyramid with the lines of people waiting patiently to get inside.

Initially built as a fortress against Viking attacks in the late 12th century, the Louvre has undergone several reincarnations before finally settling in its role as the world’s most visited museum (8 million visitors a year).

In 1546 to 1682, the fortress became the main residence of the French Kings. In 1682, Louis XIV moved his household to the golden palace of Versailles, and leaving the fortress to act as a display for royal art. Following the French revolution, the Louvre reopened in 1793 showcasing works confiscated from the Royals and the Church.

During World War II the Louvre managed to survive with minimal damage, and the staff removed and hid most of the art from the Nazis. Even after engaging in arbitration with UNESCO to return pieces to their original countries, the Louvre still has over 35,000 pieces on public display out of a collection of nearly 550,000. Meaning that even if you only spent 30 seconds in front of each piece that is on public display, it would still take you more than 200 days to see everything!

Once upon a time the palais-royal was the personal residence of Cardinal Richelieu, a royal residence and the official home of the Orléans family… today it is the home of the Council of State and Ministry of Culture.

However, most visitors will know this place as the fountain with the green chairs. No matter the weather or time of year, but especially when the sun is shining, there is a discreet battle to nab one of the green metal chairs. 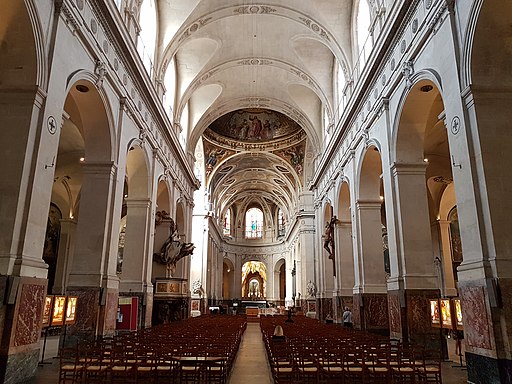