Pompeii and Herculaneum are ancient cities that sit frozen in time between Naples and Sorrento.

From its beginnings in 600BC, Pompeii was a thriving city and commercial centre with a population of some 20,000 people.

The city has everything you would expect to find in a modern city (just in the original ancient version) – homes, opulent villas, theatres, temples, a stadium, baths, take away food stores, markets and even a brothel.

Most ancient cities have long since been destroyed or built over – Rome, Naples and Athens are examples of modern cities growing from and over their original counterparts.

For all that was destroyed by the eruption of Mount Vesuvius in 79AD, an incredible amount was also preserved. Walls, furniture, sculptures and more still managed to be preserved by the ash and pumice that covered the city.

While many of the smaller mosaics and artefacts have been moved to museums in Naples, there is still many pieces of ancient life here to see. From jewellery, tools and furnishing, to the frozen casts made from human remains in pumice. (Just looking at the casts gave me chills!)

It is a city well worth taking the time to explore, regardless of whether you are staying in Rome, Naples or Sorrento. 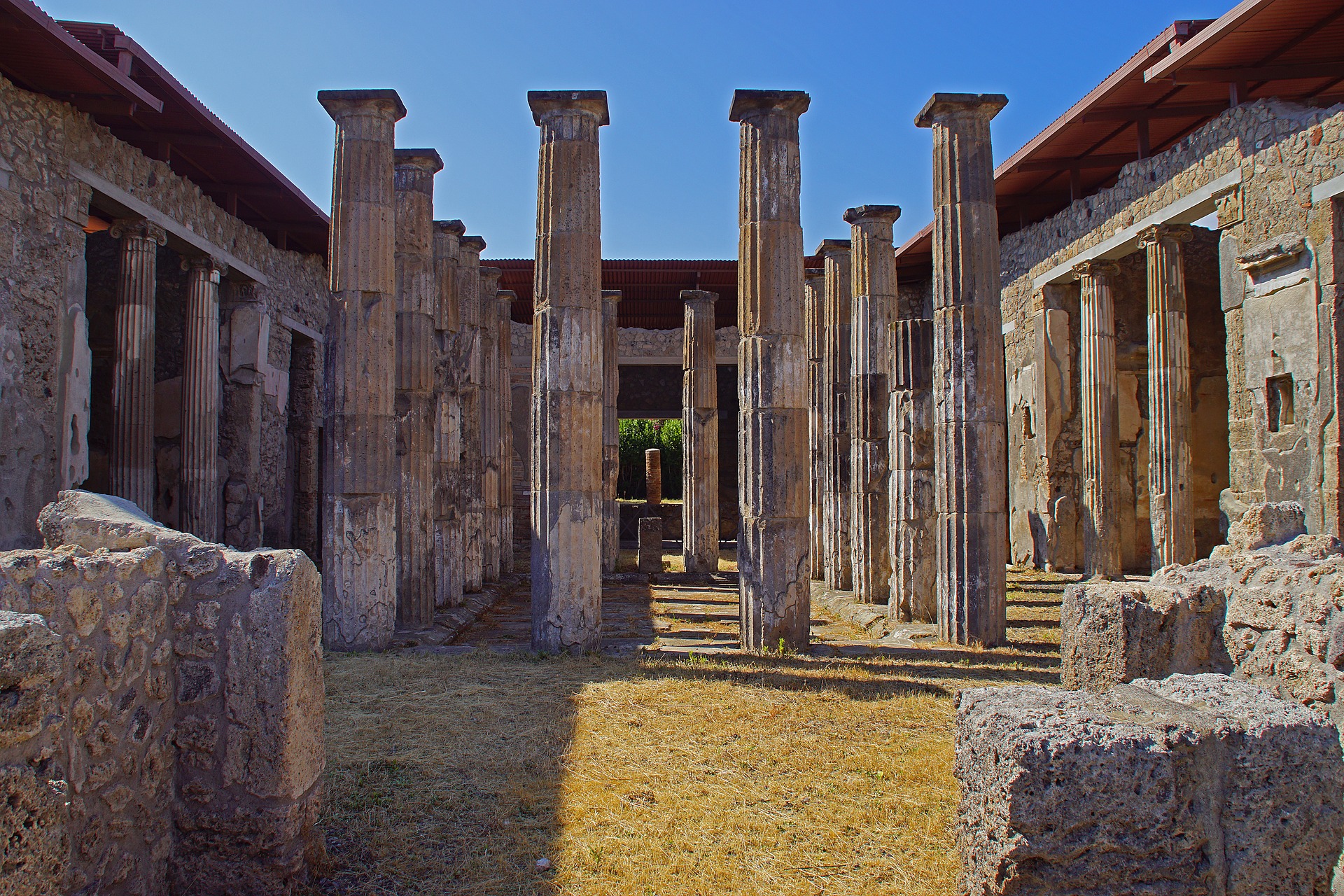 How to get to Pompeii

Whether you are staying in Naples or Sorrento, Pompeii is easily accessible by public transport as it is connected within metres of a train line.

Something to keep in mind, is that most of the ticket shops (usually part of the tobacconist – look for the red T sign) only take cash.

From Naples, take the direct train from Naples Central Station on the Circumvesuviana-Naples-Sorrento line. The direct train takes about 25 minutes, but if you find yourself on a standard train service then it will take about 40 minutes.

The station you want to end up at is called ‘Pompei Scavi-Villa Dei Misteri’, it is only a short walk to the entrance of the Pompeii Archaeological park.

If you are coming from Rome, take a high-speed train from Rome to Naples, then swap to the Circumvesuviana from Naples to Pompeii.

If you are not comfortable taking local public transport, then there are also group tours by bus (like this highly rated Pompeii day trip from Rome) which take care of the transport side of things for you.

If you are driving, then a helpful tip is to avoid the first car park (called Zeus) as it charges €5 an hour, instead go a little further out to a car park called Scavi. It is free to park and is only a 5-minute walk from the entrance.

It is very easy to purchase tickets for the Pompeii Archaeological Park, by either pre-purchasing them online or in person at the entrance.

If you choose to buy the tickets at the entrance, then please sure you do not buy tickets from the people standing along the road or at the train stations (they can be very persistent in trying to get you to buy from them).

Only buy from the registered ticket counter (tickets are 16 Euro) or purchase online if that is easier for you.

Thankfully Pompeii is still open for business, though there are limitations on the number of people who can enter (better for photo opportunities!) and a requirement to pre-purchase tickets online.

The official online ticket seller for the Pompeii site is Ticketone.it. 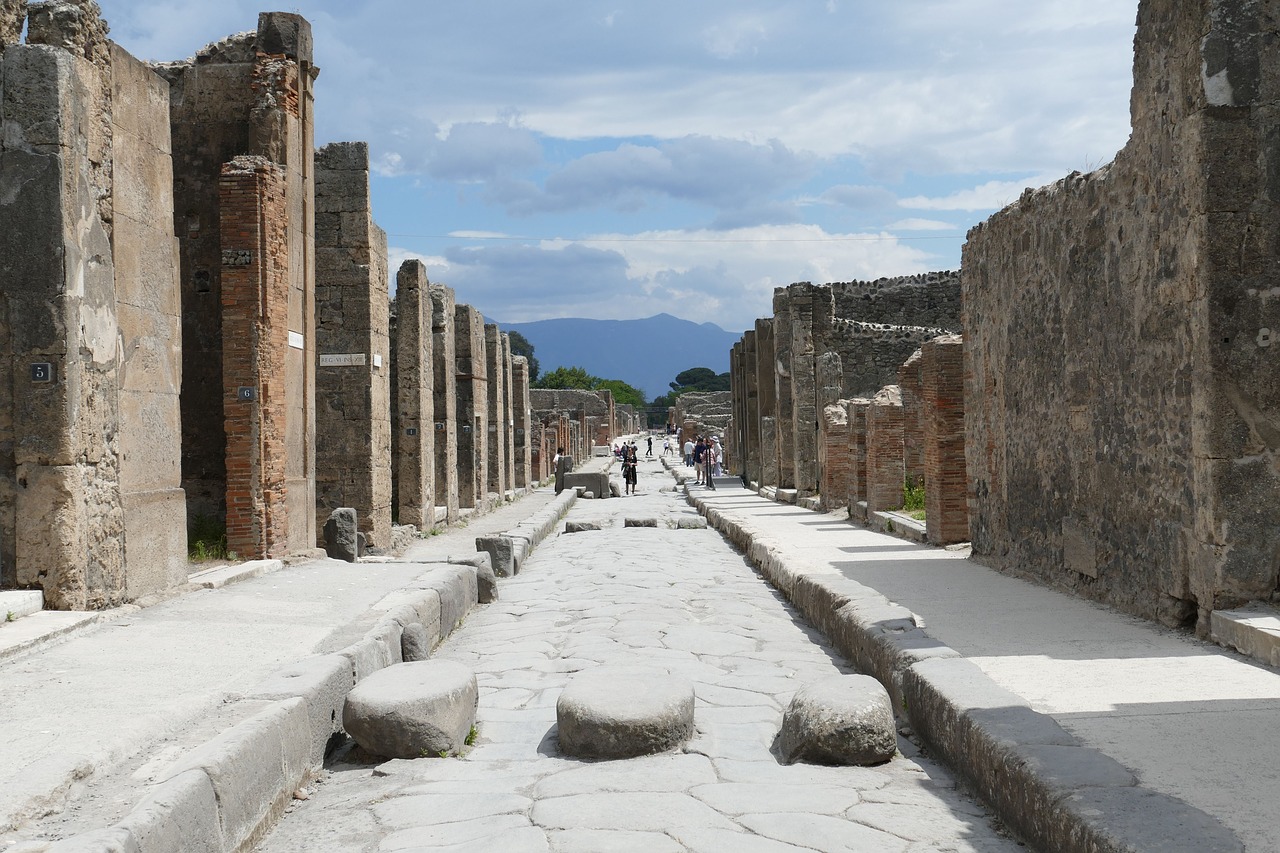 How to visit Pompeii

There are two ways to visit Pompeii – either on a self-guided tour, or with a tour group.

I have personally done both, the first time in a small tour group and the second time on my own (which to be honest is my go-to habit when visiting new places!)

The reason I like tours (in particular walking tours) is partly because there is only so much a guidebook can tell us, and partly because a great guide can immerse you into the culture and history of the area you are exploring.

But that is completely a personal preference and of course, budget.

There is absolutely nothing stopping you from staying in Pompeii once the tour has ended, and go back to the areas that interested you to explore at your own pace. 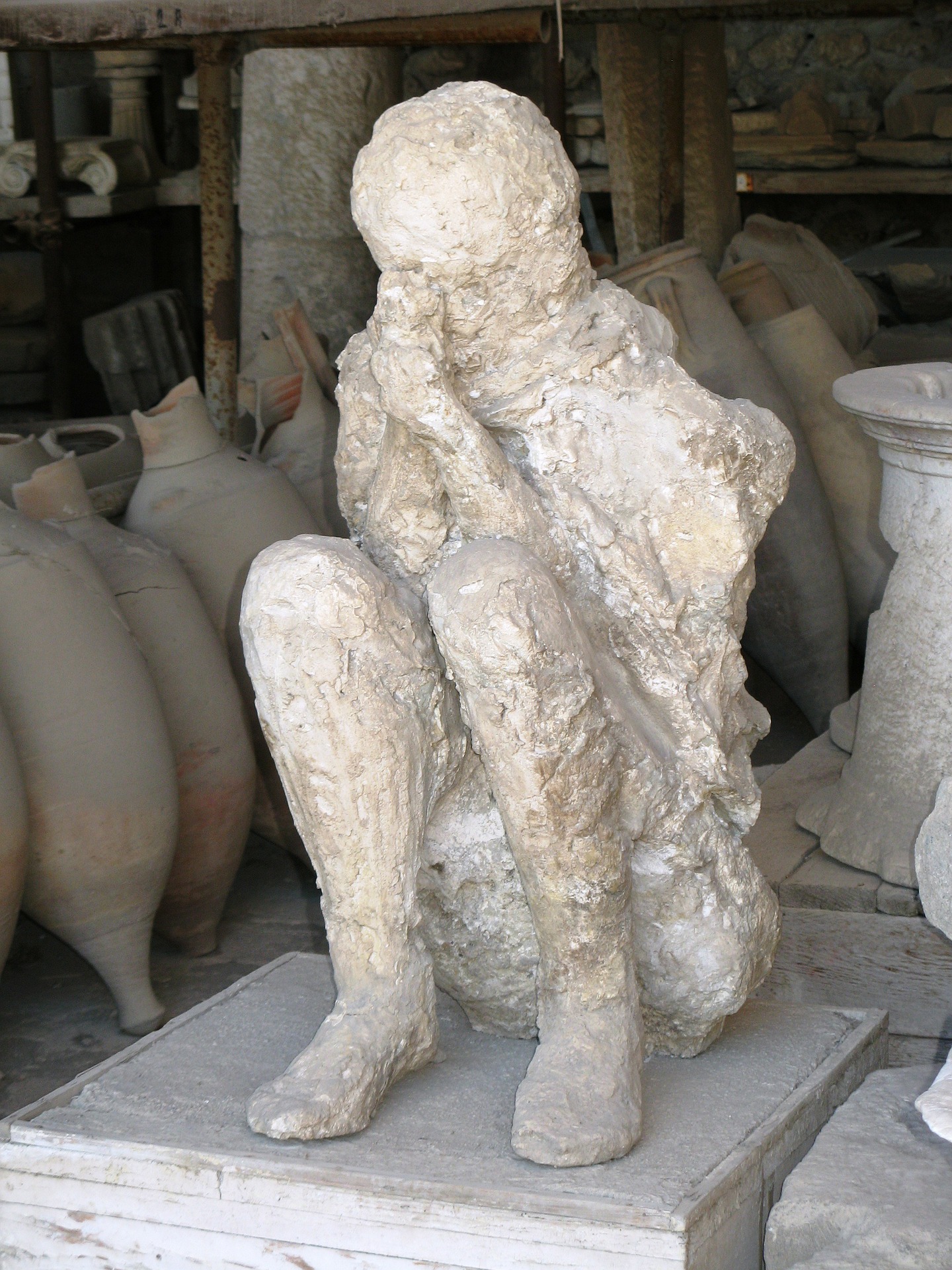 Self Guided Tours of Pompeii

When you arrive at Pompeii and you are planning on exploring the ruins yourself, make sure to ask for a map. They also have an audio you can stream and listen to while walking.

It will take you about 3-4 hours to explore Pompeii on your self-guided tour, without rushing anywhere.

There is a café and drinking water fountains available, so you will be able to top up your water bottle. Make sure to wear comfortable shoes and a hat, there is very little shade here even in the colder months!

The walking tour I joined, and now recommend, in Pompeii was by Take Walks called ‘The Best of Pompeii Tour : Unveiling the Buried City‘.

Our tour guide was able to immerse us into the history of Pompeii, with anecdotes and descriptions. It felt like listening to a story rather than a lecture, so definitely one of the best walking tours I’ve

It will take about 3 hours with a maximum group size of 15.

From the ancient fast food restaurants (take out was a thing even in the ancient world!), to the temples, bath houses, shops, brothel (complete with frescoes to advertise services on offer), and the plaster death casts, you will see all the main sites and more in Pompeii.

If you really want to delve into the historical details, then a guided tour by an archaeologist may be of more interest to you – such as this very highly recommended Small Group Tour with an archaeologist. 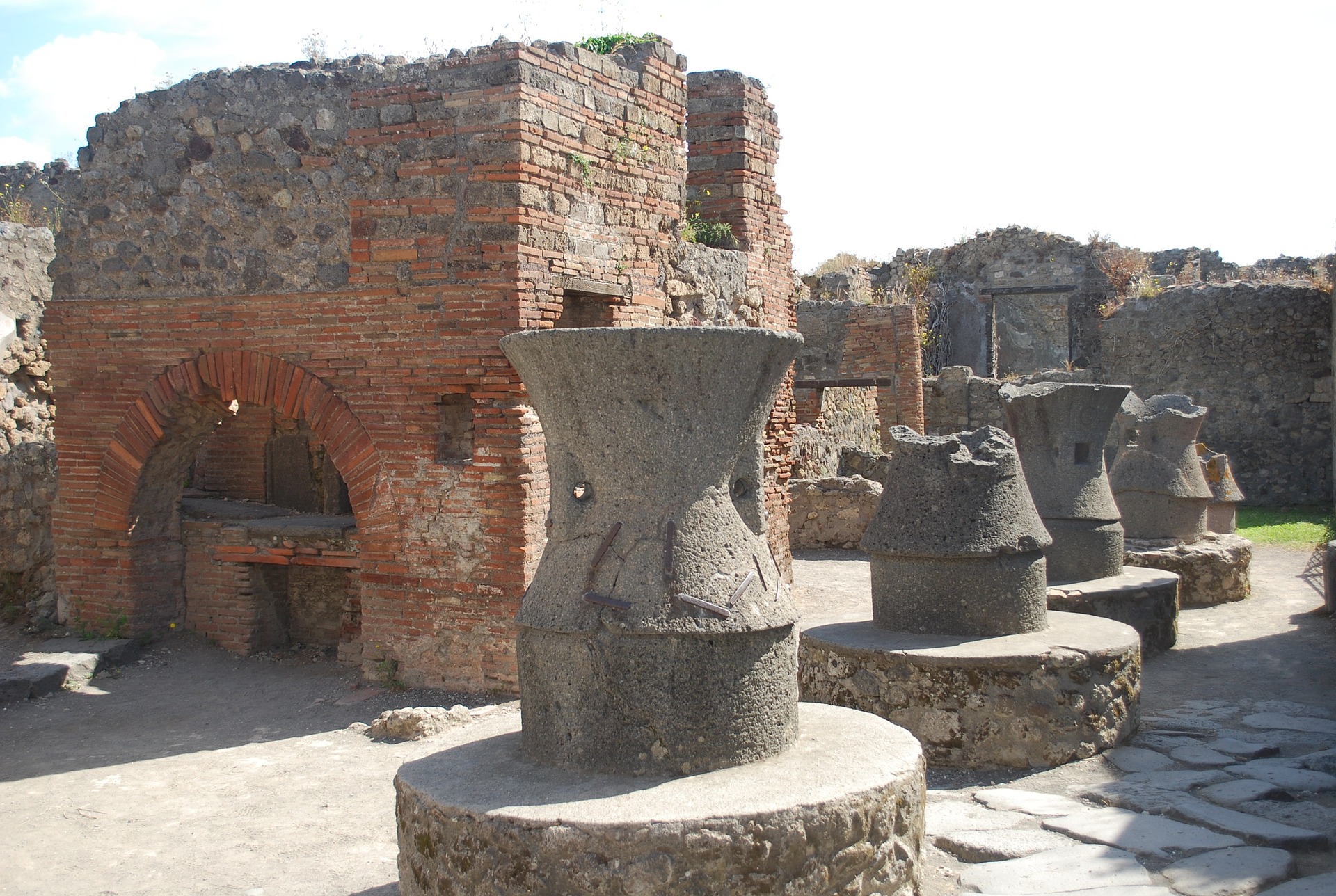 The Top 15 must-see sites in Pompeii

No matter which option you choose to take to explore this city, see if you can tick off the following 15 sites:

Herculaneum was a small fishing town that was also destroyed in the same eruption as Pompeii.

It is often forgotten, as it is a much smaller site due partly to having been a much smaller town compared to Pompeii, but also because most of it is buried about 20 meters below the town of Ercolano.

Because it did not suffer from the various stages of destruction that Pompeii did, and was instead covered by volcanic ash and pumice in one eruption. The mainly pyroclastic material that covered Herculaneum also preserved the town in a much better condition than Pompeii.

What that means for you is that you will be able to see original wooden beams, papyri, furniture, and even vibrant colours painted on walls and mosaics.

Herculaneum was however, evacuated when Mount Vesuvius started erupting. Unfortunately, not everyone escaped, and the people left behind waiting for the boats to return for them had hidden in the storerooms just before the beach. You will see the casts of the remains of the approximately 300 people who had died there in these rooms.

How to explore Herculaneum

Like Pompeii, you have the option of exploring Herculaneum on your own, or with a tour group.

Herculaneum is a much smaller site and can be easily covered in less then 2 hours without rushing. As an added bonus it does not attract the same level of tourist crowds as Pompeii, so you can really take your time without feeling crowded.

Herculanueum is accessible by the same train line (Circumvesuviana Line) as Pompeii, just get out at Ercolano Scavi and walk straight down the street (Via IV Novembre) towards the water.

The park gates open out to a long walkway that you follow until you reach the site office – perfect for a bird’s eye view of the ruins.

Take a Self-Guided Tour of Herculaneum

When you arrive at Herculaneum, make sure to ask for a map.

It will take you about 1-2 hours to explore on your own. The areas of the town that have been excavated are very compact and easy to navigate.

If you want to make the most of the time at the site, then I recommend joining a guided tour group, such as the Herculaneum Small Group tour which includes the entry ticket and a local archaeologist as a guide.

What are the top things to see in Herculaneum?

No matter which option you choose to take to explore this city, see if you can tick off the following 12 sites: 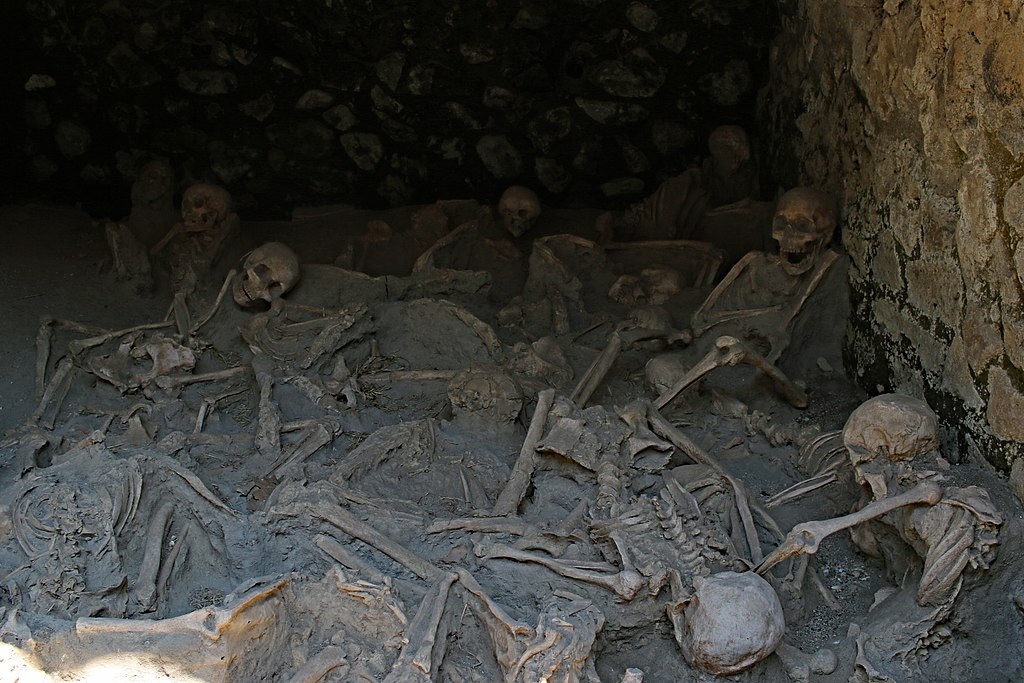 Can you visit both Pompeii & Herculaneum in one day?

Of course! It will mean a lot of walking though, so make sure to have comfortable shoes on and plenty of water and snacks with you.

If you want to avoid the crowds at Pompeii (and the worst of the afternoon heat), then I would recommend visiting Pompeii first, finding somewhere for lunch then continuing to Herculaneum.

There are also tour groups that will combine both together, which is perfect for when you are short on time and want to make the most of the experience. If a combined tour interests you, then have a look at this highly rated small group tour of Pompeii & Herculaneum.

Helpful things to know when planning your visit 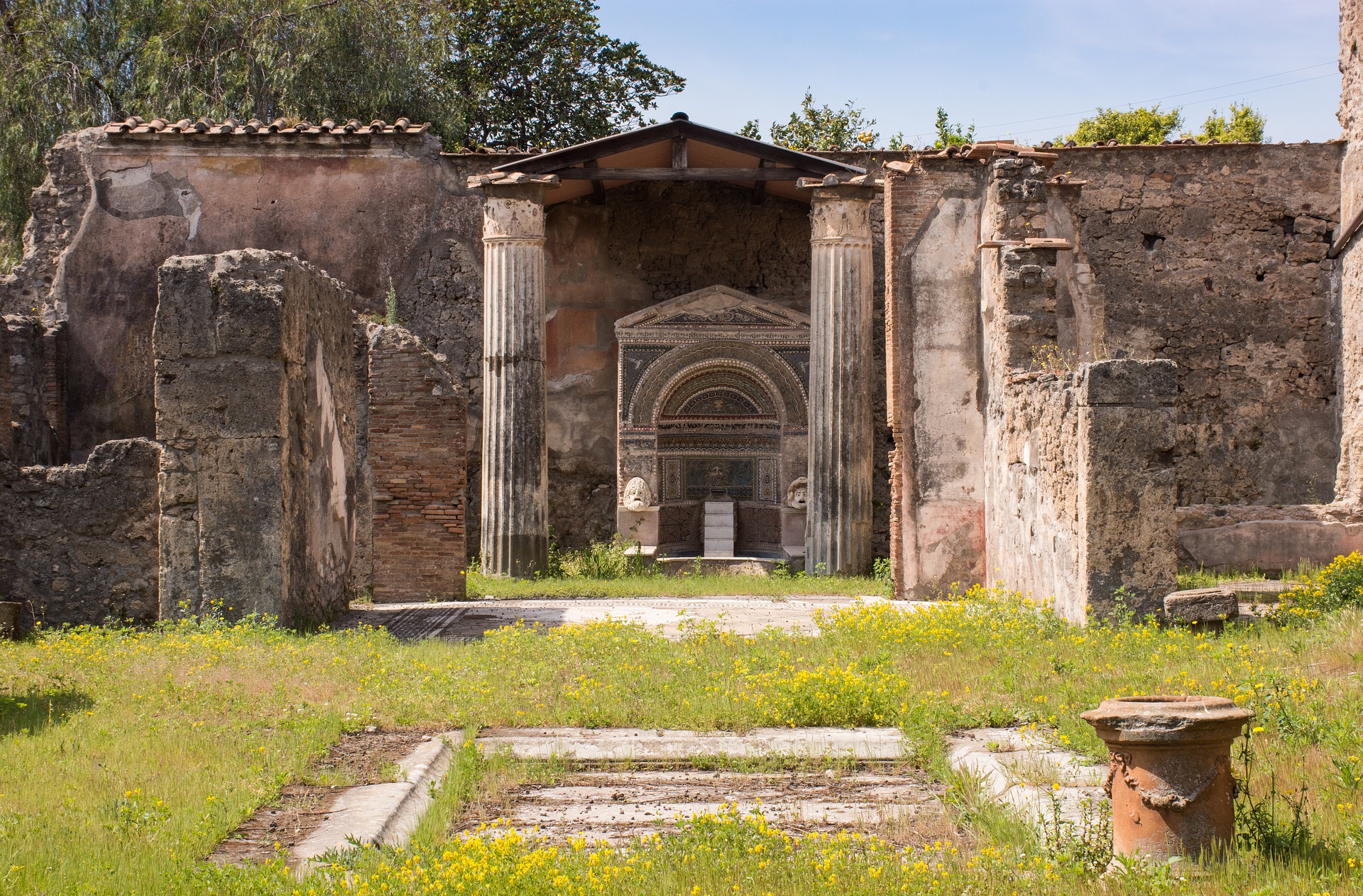