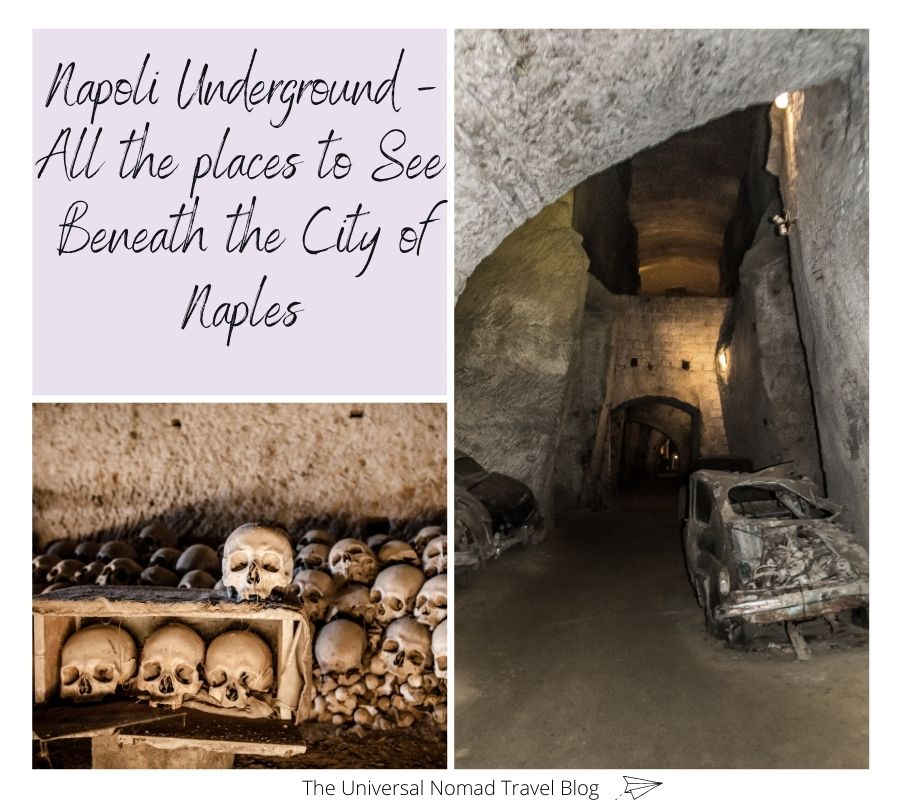 Napoli Underground – What You Should See Under the City of Naples

For a city so full of life and chaos, Naples has a close bond and appreciation of death and the afterlife.

Thanks to its turbulent history and strategic port location, there are a number of morbid sites hidden just beneath the earth.

While not for everyone, some of these sites are definitely worth seeing as it reflects a history that is not found anywhere else in the world.

There are nine catacombs and cave complexes under the Rione Sanità. However only San Gennaro, San Gaudiso, San Severo and the Fontanelle Ossuary have been unearthed.

Beneath the Basilica of Santa Maria della Sanità is the second largest cemetery in Naples. Oddly enough, this cemetery was once a necropolis, but is now one of the most densely populated and popular areas of Naples.

Gaudiosus the African was bishop of Abitina, Tunisia. While he was in Naples, Gaudiosus was said to have built the Caponapoli monastery and accredited with transferring part of the relics of Santa Restitua to Naples.

After his death, Gaudiosus’ grave soon began to attract devotees of the Christian faith, and the cemetery eventually expanded to become the Catacombs of San Gaudioso. While exploring these caves, you will find everything from early Christian artworks to 17th century graves for nobles.

Note the mix of African symbols and influences in the Christian frescoes – no doubt due to San Gaudiosus’ African heritage.

The cemetery was abandoned for some time until the discovery of a fresco of the Madonna, which had been covered in mud. The Madonna della Sanità is the oldest depiction of the Virgin Mary in the Campania region and contributed to the restoration of this incredible catacomb.

You can buy tickets online here, and there are guided walking tours every hour.

Open Hours: Monday to Sunday from 10am to 1pm

The second century catacombs are named for Naples’ patron saint, the martyr San Gennaro. Along with being the oldest in the city, it is also the largest in all of Southern Italy.

Over the years it has been expanded and added to. While large parts of the site have not yet been excavated, it is believed there were approximately 3,000 burials done in this cemetery.

As you walk through the vast network of passageways split over two levels, you will pass graves, crypts, frescoes, artwork and of course, skulls.

What is fascinating is seeing the class differences even in death. The poor were buried in the floor, the middle class had small niches carved into the walls and the wealthy were placed in large rooms with frescoes and artwork.

Some of the earliest Christian paintings in southern Italy can be found in the upper catacombs, dating back to the third century AD.

Look for the single nave basilica dedicated to the first patron saint of Naples – St. Agrippinus. It is covered by a bishops chair which was carved from the rock and a stone altar.

You will find also find a large baptismal font commissioned by Bishop Paul II who had hidden in the catacombs during the eighth century. The Crypt of Bishops where Naples’ bishops were buried and a massive underground basilica with no less than three naves – the basilica adjecta.

You can buy tickets online here, and there are guided walking tours every hour.

Location: Via Capodimonte, 13 entrance next to the Madre del Buon Consiglio Basilica or click here to see it on Google Maps

The Fontanelle cemetery is named for the area which it sits (Fontanelle – or little hills). Originally a quarry for the local turf, it became a burial site due to the large number of epidemics that struck Naples over a relatively short amount of time.

For example, during the plague of 1656, some sources claim that up to 250,000 corpses were buried there (over half the population of 400,000 at the time). While there was no time to organise the bones (a deep tradition in Naples), it happened later near the end of the 18th century.

These were added to by the occurrence of 3 famines, 5 eruptions of Mount Vesuvius, 3 earthquakes and 3 revolts. Not to forget the transfer of bodies that had been buried in churches and consecrated grounds after the Cholera outbreak in 1837!

You will still find devotees of the Cult of Anime Pezzentelle (derelict souls) come in to care and clean their designated skulls.

To learn more about the Cimitero delle Fontanelle visit their  website

The cemetery is Free to visit. Fontanelle do offer public guided tours for € 7 per person, however this tour is only in Italian.

Location: Via delle Fontanelle 80, Naples or click here to see it on Google Maps

Open Hours: Monday to Sunday  from 10am to 5pm

Now one that is not for the faint of heart (or dog lovers), this was a popular tourist attraction during the Grand Tours of Europe in the 17th and 18th centuries.

While fairly innocuous in theory, it is a cave that is filled with toxic levels of carbon dioxide from nearby volcanoes. Manageable by humans, but deadly for animals. Local guides playing on horror stories, would lower dogs down on the ground of the cave until they became unconscious then attempt to revive them in the nearby lake.

The site was eventually closed after the lake became too polluted and was eventually drained. But during the height of its popularity, it attracted visitors such as Alexandre Dumas Père and Mark Twain.

It is now being restored by local volunteers.

To learn more about the Grotta del Cane click here

Location: Via Raffaele Ruggiero, Agnano, Campi Flegrei, Pozzuoli, Napoli. Behind the Terme d’Agnano Hotel or click here to see it on Google Maps

Open Hours: Not currently open to the public, but being restored

Partly above ground, partly below, the Church of Skulls (chiesa delle cape di morte) sits over two levels. In case you haven’t picked up on the theme of death in Naples, there is a cult-like devotion towards death and the dead.

For lovers of fine art you will find stunning paintings such as The Death of St Alessio (Luca Giordano) and Virgin with the Souls of Purgatory (Massimo Stanzione) above ground, however the more fascinating part is below ground where devotees of the Neapolitan Cult of the Dead worship the anime pezzentelle (pour souls).

This church became the centre of this cult due to the large number of unknown people who were buried there (mostly those who could not pay for a marked grave) thanks to plagues that swept through the city.

A peculiar habit of this cult is for followers to ‘adopt’ skulls and care for them while praying for lost souls. The belief is that because the bodies could not be named or buried on consecrated ground, their souls automatically went to purgatory. So the faithful would adopt skulls and pray for them, hoping that when the lost souls found their way to heaven, they would offer graces and blessings in gratitude.

Look for ‘Lucia’, a skull believed to belong to a 18th century bride who had died from tuberculosis, and had become the unofficial protector of young brides. Devotees still leave gifts and bridal bouquets at her shine.

To learn more about the Church of Skulls click here

For a change of pace from cemeteries and crypts, you can explore the underground passage known as the Galleria Borbonica.

This tunnel system was started in 1853 by King Ferdinand II as a way to escape the Royal Palace (Palazzo Reale) to the military barracks and the sea. The tunnels were built as part of the 17th century Carmignano Aqueduct system.

While never completed, the tunnels were later used as air raid shelters and even an emergency hospital during World War II.

Access to its massive galleries and tunnels are only available by tour, but that includes access to the cisterns and eclectic mix of relics and rubbish left there over the years. It truly is a strange feeling walking amongst a random collection of everything from old cars and motorcycles to fragments of statues and bits of architecture.

To learn more about the Galleria Borbonica click here

Open Hours: Due to Covid-19 the open hours vary, so check their website for updates

Tour Options: Galleria Borbonica have 4 types of tours, the Standard one starts at €10 per person

Quite literally Naples Underground… follow a twisting and winding path to 40 metres below street level and you will find a maze of underground tunnels and caves.

Begun by the ancient Greeks in the 3rd Century BC to extract limestone for the city walls, it has been expanded on by the ancient Romans to divert water from Mount Vesuvius, as well as by many of the various inhabitants of Naples. It has been used as a rubbish tip and air raid shelter during World War II.

Accessible only by tour, this is a breathtaking example of human ingenuity. It was a truly incredible feeling, standing in a giant cavern that had been carved out by ancient Greeks and Romans.

While there are large caverns and cisterns, there are also many extremely narrow passageways where you will be given a candle to hold to light your way. Not for the claustrophobic!

To learn more about the Napoli Sotteranea click here

Open Hours: Are limited to public tour group slots which are Monday to Sunday 10am-12pm, 2pm-4pm and 4pm-6pm (in English)

Tour Options: I did the group tour with Napoli Sotteranea, and I recommend flat soled shoes with grip and a cardigan or jumper. It gets cold down there! If you struggle with claustrophobia then this tour may not be for you as there are several dark and narrow sections.

A small but absolutely stunning church and museum. While technically not underground, the museum is which counts!

The Museo Cappella Sansevero is well worth your time to visit. It is a masonic inspired baroque chapel, originally built late 16th century as a family tomb.

Each painting and sculpture was commissioned by Prince Raimondo di Sangro to represent his family, and their turmoils.

I was blown away by the delicate and intricate details on the sculptures, and absolutely no photo can do them justice. The Cristo velato (Veiled Christ) is incredibly lifelike, likewise the detail on the marble netting on the Disinganno (who represents Prince Raimondo’s father).

But if you follow the stairs below ground, you will find a strange collection of scientific artefacts which seem completely at odds with the chapel above… there are two perfectly preserved human arterial systems. One is male, the other female. It is still not known if these are real or just incredibly realistic fakes which have lasted over 2 centuries.

It is strongly recommended to book online in advance as only 45 people are allowed inside the museum at a time.  Standard tickets are €8.00

As you can see, there is plenty to do underground. Perfect for days that are rainy or even too hot. Just remember to bring a jumper or wrap… it gets cold in the underground!

Have you visited any of these sites? What did you think?

Explore Naples with these Tours

What to do in The City of Naples

The Best Day Trips from Naples 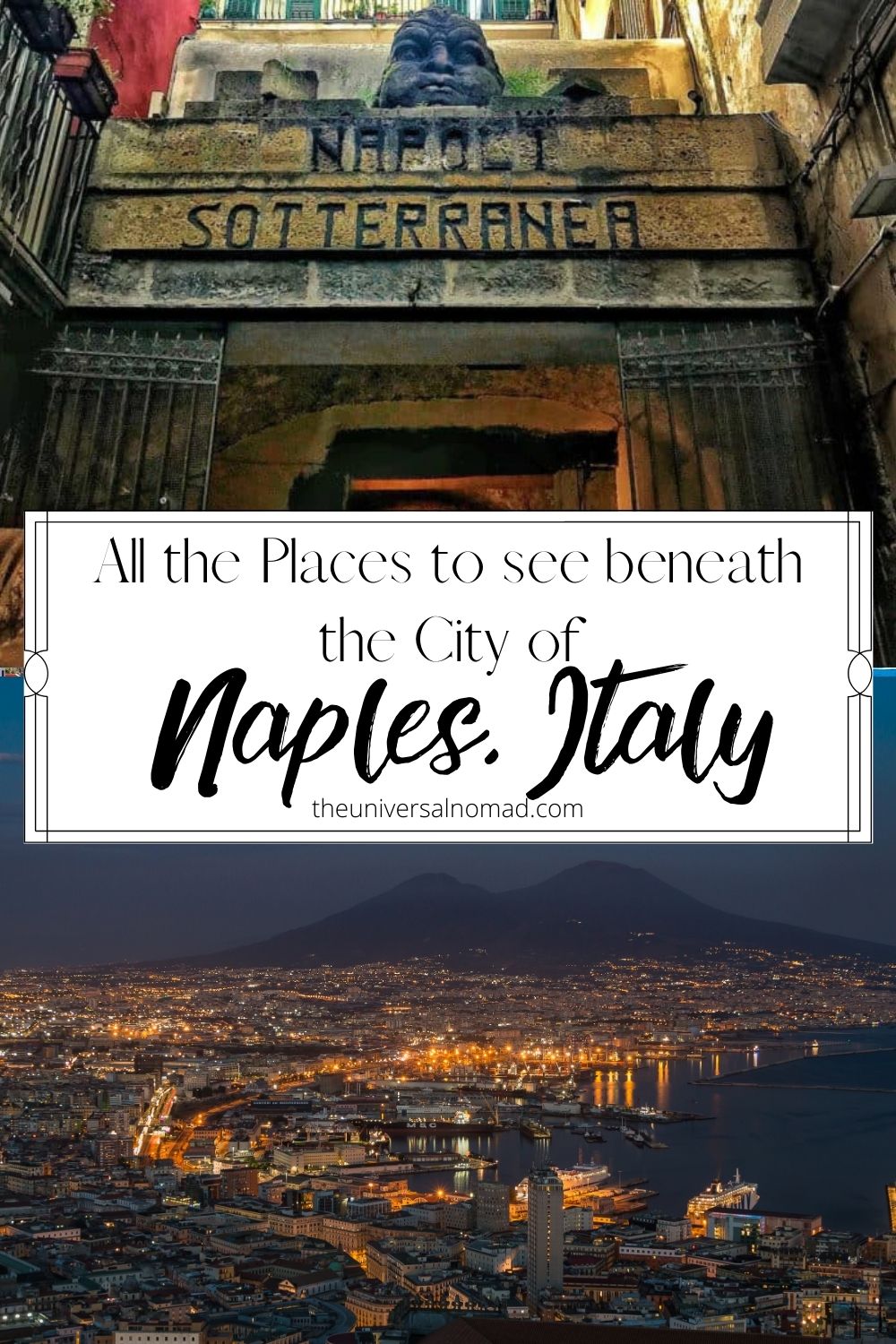 What You Can do in the City of Naples

What Happened When I First Started Travelling