The Best Day Trips you can do from Naples

While there is plenty to see and do in Naples itself, there are also a number of great day trips that you can do as well.

The Campania Region of Italy covers a decent amount of ground, as well as some incredible destinations and sites.

In one day alone I was able to visit Herculaneum in the morning, was at Pompeii for the afternoon and had dinner overlooking the bay at Sorrento. All without rushing and at my own pace. I could have fit Mount Vesuvius as well but it was a cloudy day, which meant we wouldn’t be able to see anything from the top.

Whether by bus, train, ferry or car, here are the best places to visit while you stay in Naples…

Pompeii, Herculaneum and Sorrento are all reachable by the same train line – the Circumvesuviana Line from Napoli Piazza Garibaldi Station.

Pompeii suffered a much more prolonged attack from the eruption of Mount Vesuvius in 79AD, which also allowed many of the residents to escape.

Between pumice rain, lava, fire and ash the city of Pompeii was both destroyed and preserved. Lack of care from many previous excavations has meant the site has sustained some damage. But the size of the city, and that it wasn’t buried under a new city, meant that excavations are significantly more extensive. Pompeii is huge!

You can download the tour guide and listen as you walk through the site at your own pace, or join an organised tour. Either way, it is easy to spend an afternoon walking through this ghost of a city and seeing how people lived long before we did.

If you prefer to join a small group tour to explore Pompeii, then have a look at this highly rated group tour by Take Walks. 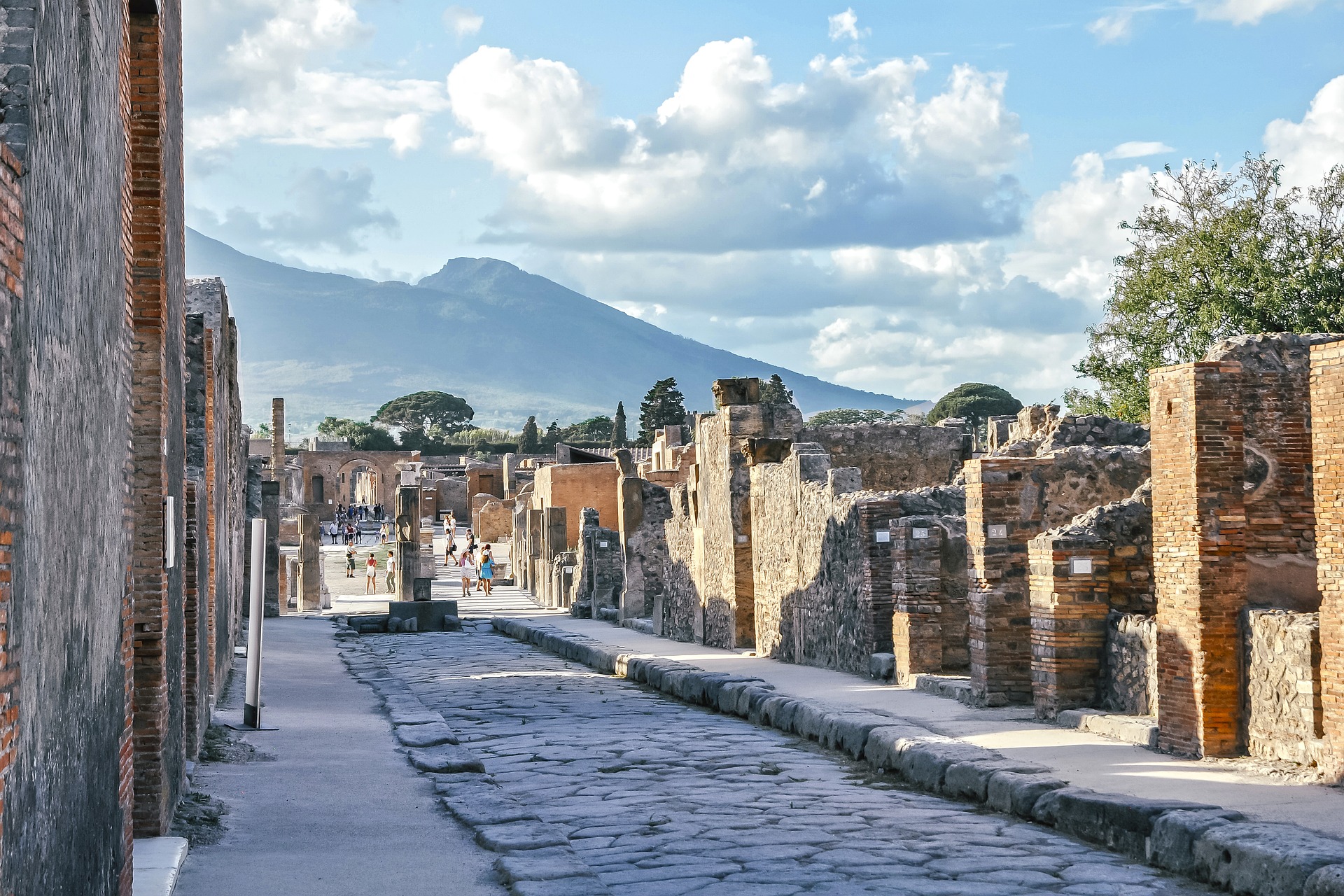 Like Pompeii, Herculaneum (Ercolano) was also buried under the volcanic explosion of Mount Vesuvius in 79AD. However, the way they were buried differs, and that is part of why it is worth seeing both sites.

Herculanuem was buried almost instantaneously by mainly pyroclastic material. This carbonised and thus preserved organic material such as wood, paint, food and papyrus. The site was also buried so deeply that looters were not able to rob it until it was officially discovered in 1709. As a result, the entire site is much better preserved then Pompeii.

To get to Herculaneum, get out at Ercolano station and walk straight down towards the water. There is a gate to go through, but the ticket office and official park entrance is at the end of the walkway (keep going straight!).

Most tourists skip Ercolano and go straight to Pompeii, but after spending hours at both sites I found that I preferred Herculaneum. Being more sheltered (the site is in a giant open air pit), you can’t help but feel more surrounded by history. The colours from the paint and tiles are still bright, and the architecture is better preserved. It is impossible to describe the eerie stillness I felt when hiding in one of tunnels after it started raining.

While it will be impossible to completely excavate Herculaneum, as the current town of Ercolano sits right above it, what they have excavated is incredible.

Want to see Pompeii & Herculaneum on the same day? Then this small group tour will take you to both sites, making it a great option when you are short on time.

A part of a string of active, dormant and extinct volcanoes around the Campania region, Mount Vesuvius last erupted in 1944.

Which makes it surprising that it is surrounded by urban development and a thriving tourism industry! But no matter how many times local villages and towns have been destroyed in the past by this volcano, people keep coming back and rebuilding.

There is a thriving tourism trade just for the volcano. You can actually hike to the top of it, you won’t find lava but there is some steam. Just keep in mind that it is a steep climb and will take you about 30 minutes to an hour to walk up depending how fast you walk. But if the weather is clear, the views you will find from the top are well worth the hike.

Prefer a guide to talk you through the history and the region? Then have a look at this half day tour of Mt Vesuvius that picks you up from Pompeii. 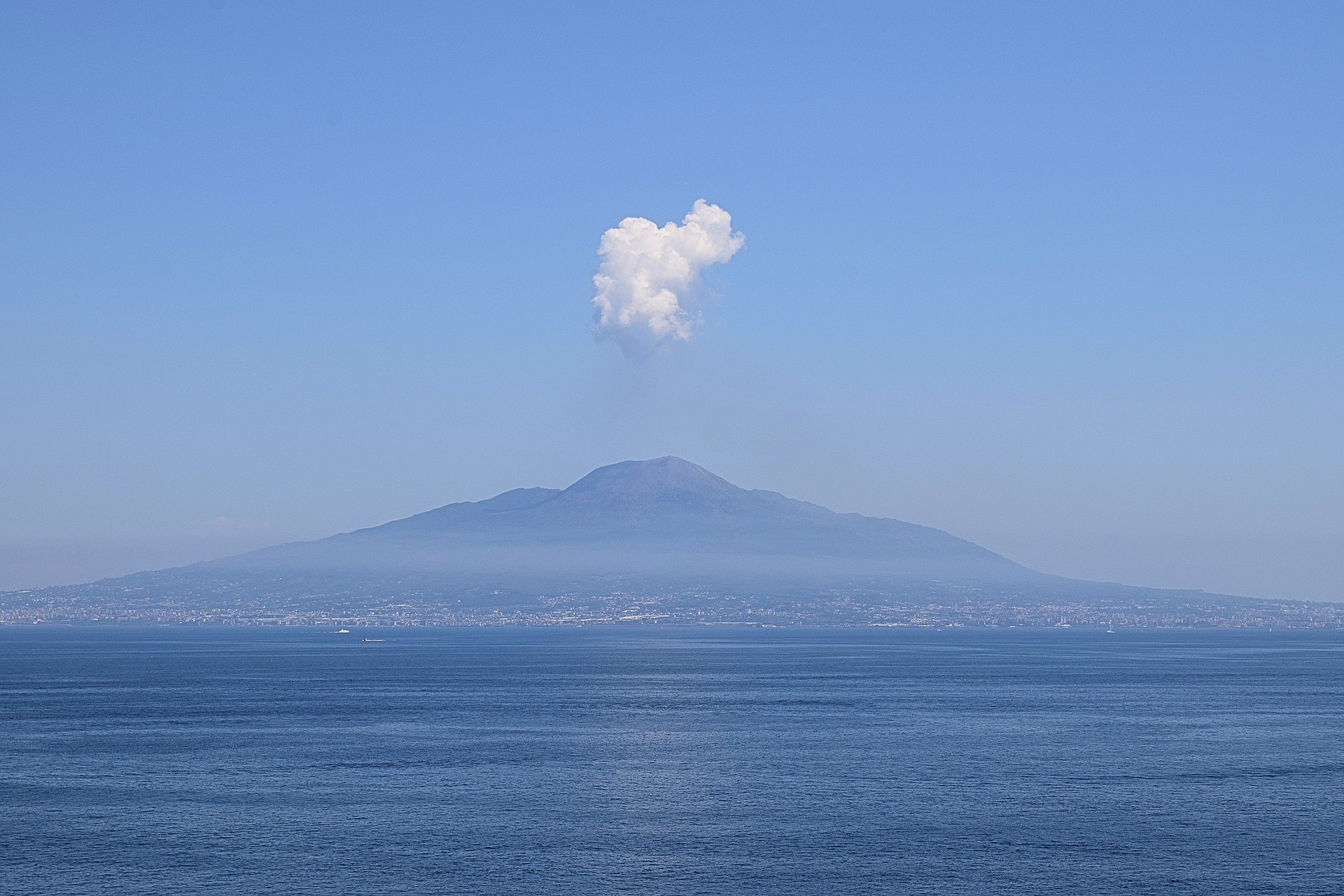 At the end of the Circumvesuviana Line is the small resort town of Sorrento. Filled with beautiful tree lined cobble stoned streets, small shops with local craft shops filled with lemon candies and marquetry, and luxurious hotels, it is the complete opposite of Naples.

Wonder through the town to the cliff edges and you will find yourself with a view that is absolutely stunning. Look down to small ports at the base of the cliffs and out towards the coast of Naples and the island of Capri and Mount Vesuvius.

Make sure to try some of the locally produced Limoncello while you are there.

There are ferries and hydrofoils connecting Sorrento to Naples and the Island of Capri, making it easy to continue your explorations. 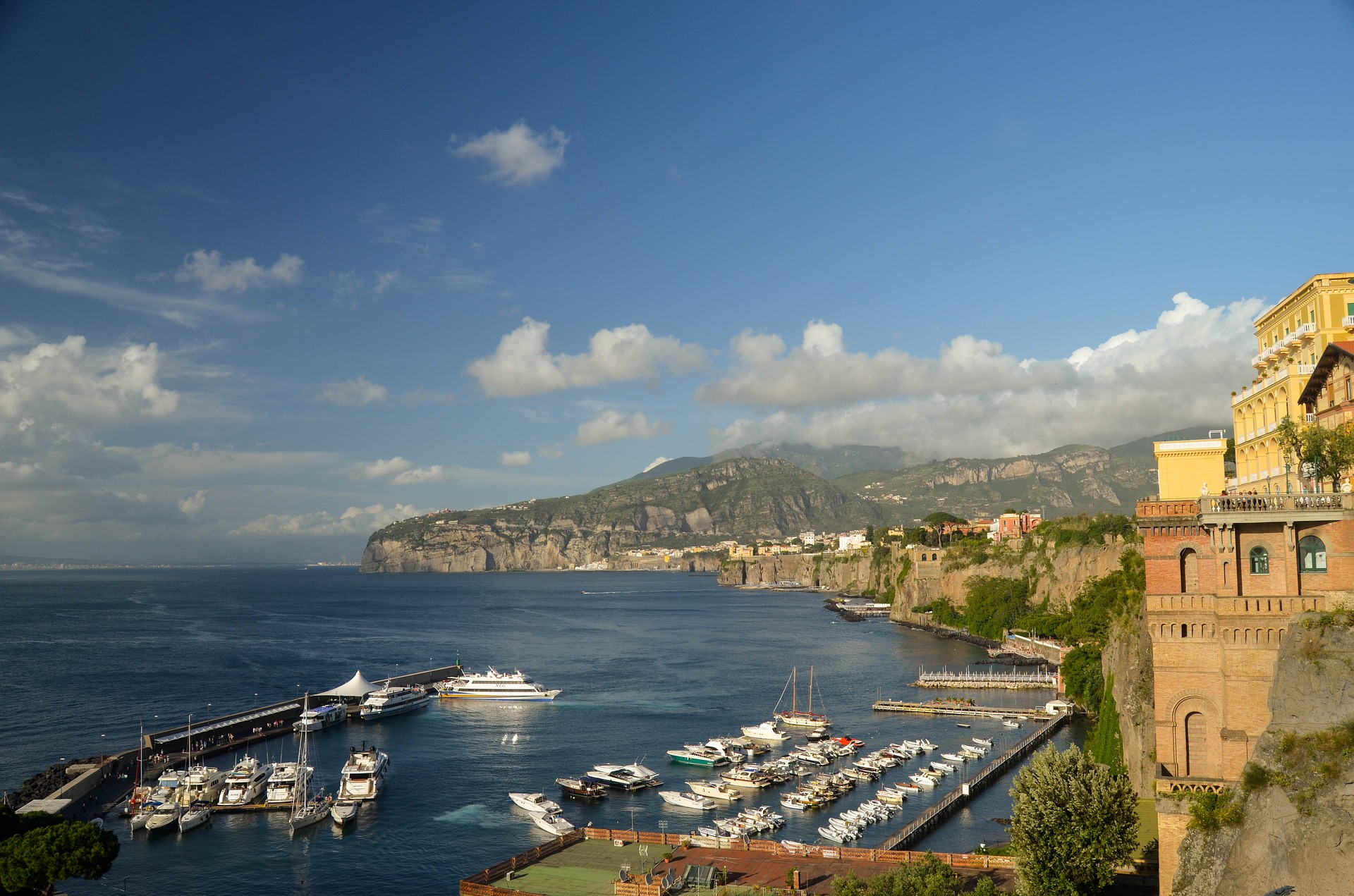 Similar to Cinque Terre, the Amalfi Coast is a collection of towns and villages along an absolutely stunning coastline. No matter where you stop along the way, there will be a landscape to take your breath away.

The entire Amalfi Coast is a UNESCO Heritage protected site, and the towns of Positano, Ravello, Maiori, Minori and Vietri sul mare (and more) all have something different to offer along this coastline. Even the centre of Amalfi has a magnificent Cathedral and plenty of small shops to wonder through.

The entire area feels like it is straight from a classic movie scene, with each village clinging to the mountainsides that look straight out to the stunning blue waters of the Tyrrhenian Sea.

You can get to Amalfi by a bus from Sorrento, car hire or private tour.

Want to make the most of a day trip from Naples? Then have a look at this full day trip to Sorrento, Positano and the Amalfi Coast.

Positano is a destination in its own right, known for its village where the houses seem to lead straight down the steep cliff to the port and beach below. A popular destination for the rich and famous, the wide umbrellas in neat rows on the sandy beach will be instantly recognisable…

Take in the sun, explore the town and enjoy some fresh seafood with local limoncello while you are there. 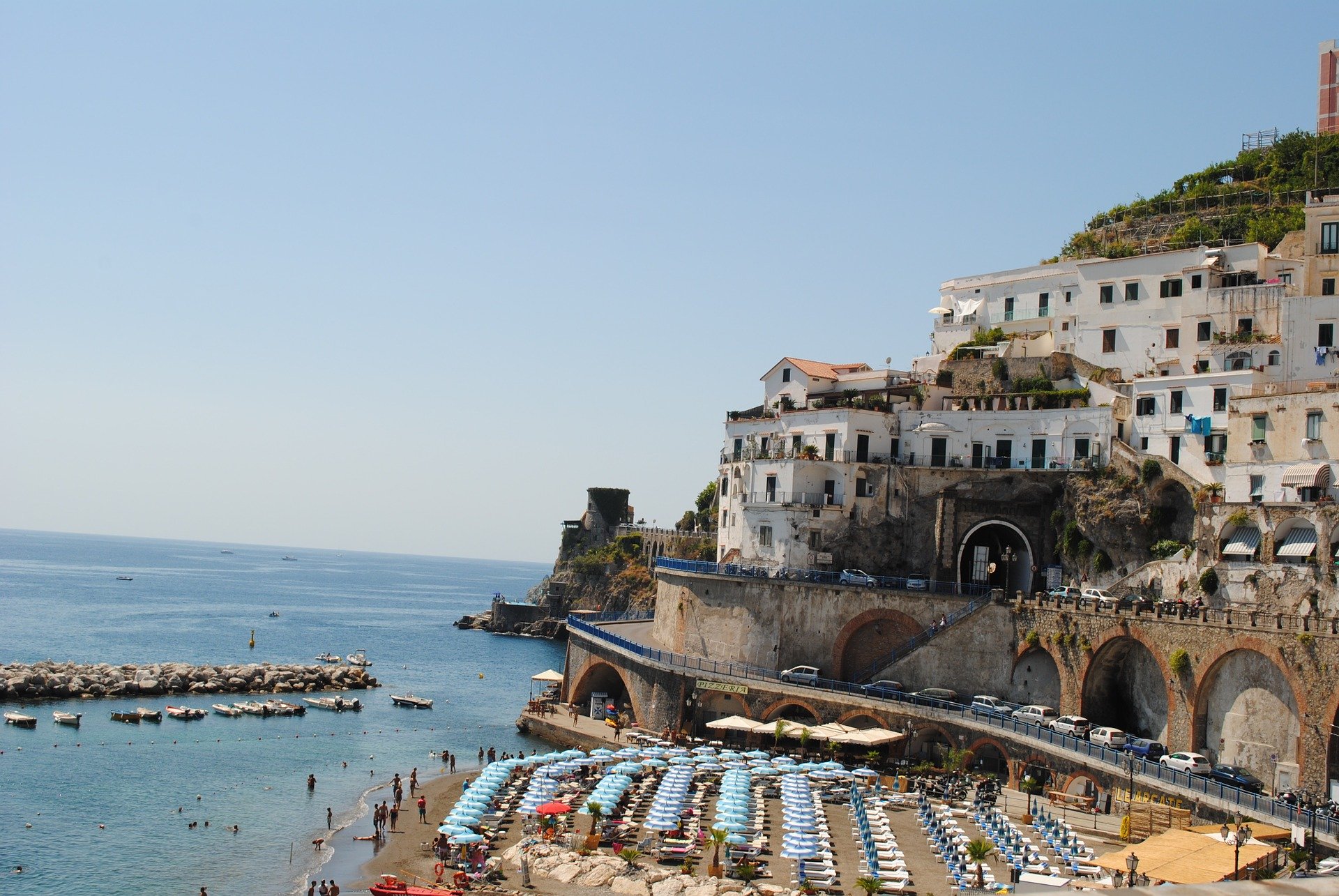 Another jewel along the Amalfi coast, Ravello is a little harder to get to as it is in the hills above Amalfi. Known for its gorgeous gardens, vineyards and stunning vistas, you can pay to access the gardens of Villa Rufolo (the historic centre of Ravello, and one of the oldest and expensive villas in the Amalfi) and gaze across the Tyrrhenian Sea while standing amongst flowers.

Try a something different and take a private tour of the Amalfi coast on a vintage Vespa. Your guide will take from all the way from Positano to Ravello, Amalfi and Atrani, with plenty of breaks for local food, photo ops and exploring.